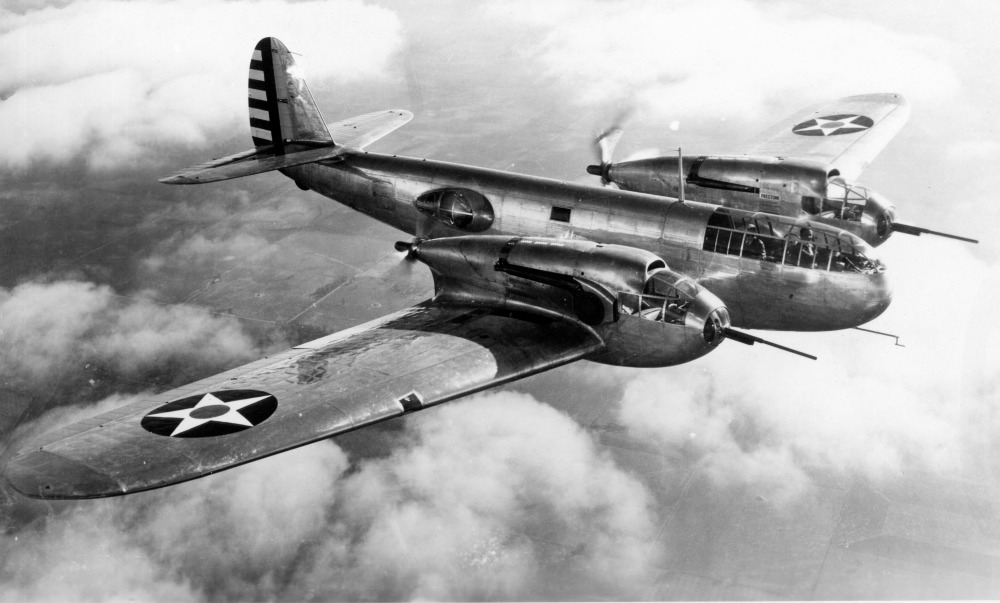 Designated as a “heavy fighter” and/or a “bomber destroyer,” the American-made Bell XFM Airacuda was the Bell Aircraft company’s first airplane design. First flown in 1937, the plane had a number of innovative features — and many design flaws. In all, 13 were produced in three slightly different versions and one fully operational squadron was actually formed.

The plane was created to intercept enemy bombers at distances greater than ordinary single-seat fighters. It contained a number of features that had never before been introduced on military aircraft. It incorporated a sleek “futuristic” design that featured propellers in the back of its wings rather than in the front.

The aircraft had a crew of five and was equipped with a 37mm M4 cannon and an accompanying gunner in a forward compartment in each of the two engine nacelles. Though gunners were capable of aiming the cannons, they were primarily there to load them with the 110 rounds of ammunition stored in each of the nacelles.

Of the five, there was a pilot and copilot/navigator who doubled as a fire-control officer, along with gunners. The cannons were aimed with an optical site in combination with a “Thermionic” fire control system that was gyro-stabilized and originally developed for anti-aircraft guns. A radio operator/gunner armed with two machine guns was stationed at mid-fuselage for defense against a rear attack.

However, the plane was plagued with problems from the outset. Despite its sleek design, it was slower than most bombers. It was not maneuverable enough to ward off or compete with enemy fighter planes. It had a very small bomb load of just 600 pounds, so it could not be used as a fighter/bomber. The cannons filled the gun nacelles with smoke when fired, and fears mounted over how gunners would get out of their nacelles in an emergency.

What’s more, an emergency bailout meant that both propellers would have had to be feathered in order to effect an escape by gunners, though this was partially addressed with explosive bolts on the propellers to jettison them in case of a bailout. As for the guns, the muzzle velocity of the 37mm cannons was low thus making them difficult to use as an aerial weapon due to limited range. And the Allison V-1710-41 engines, though pretty much trouble-free in other types of planes, had insufficient cooling systems installed. They tended to overheat while on the ground like other “pusher” designs because there was no prop wash to help cool them.

There were other problems including a faulty electrical system that just made this experimental aircraft unreliable and ultimately unusable. But it helped break Bell Aircraft into the plane-making business.