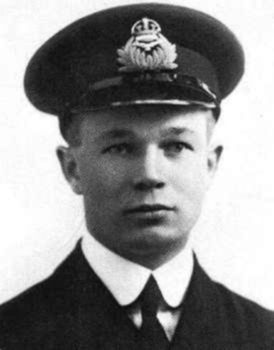 After the war broke out, Brown enlisted in 1915 as an Officer Cadet at the Army Officers’ Training. As a prerequisite to joining the Royal Naval Air Service, Brown took flight training at the Wright Flying School near Dayton, Ohio, from September to November 1915. He was confirmed as a flight sub-lieutenant in the RNAS on 15 November 1915.

Early on, it looked as though Brown’s flight career ended before it began, On 2 May 1916, he crashed his Avro 504 plane, initially appearing to emerge from the accident without injury. However, the following morning he began to experience severe back pain. Doctors diagnosed him with a broken vertebra.

Brown then spent two months in the hospital. In September 1916, he was posted to Eastchurch Gunnery School in England. In January 1917, he was sent to Cranwell to complete advanced training.

Finally, in March 1917 Brown was assigned to No. 9 Naval Squadron and flew coastal patrols off the Belgian coast. The following month he was posted to “B” Flight and attached to the Royal Flying Corps in preparation for the Battle of Arras. But he fell ill and missed “Bloody April,” a period of unusually high casualties for the British Army.

In June 1917 he was posted to No. 11 Naval Squadron, and the following month he got his first kill when he downed an Albatros D.III, while adding another three unconfirmed kills, according to reports.

After No. 11 was disbanded in August 1917, Brown returned to No. 9 Naval Squadron, flying a Sopwith Camel.

Eventually, Brown was made a flight leader and during an aerial battle on 21 April 1918 against German fighters led by Manfred von Richthofen, the “Red Baron,” Brown was credited with shooting him down.

This is highly controversial, however; historical accounts based on additional data indicate that Richthofen, who at one point drifted over Allied lines, was probably shot down by Australian army machine gunner Sgt. Cedric Popkin.

Brown was eventually awarded 10 kills, including the Red Baron. Another distinction: He never lost a pilot in his flight during combat, which was very rare for an air unit commander of the war.