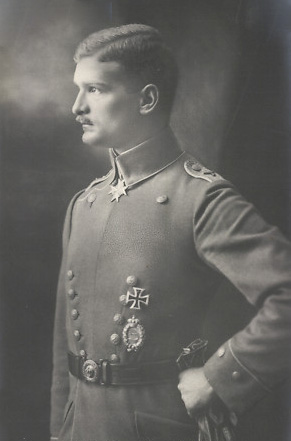 Lt. Max Ritter von Mulzer of the German Empire graduated from cadet training with the Royal Bavarian Cadet Corps on 10 July 1914. From there he was commissioned in the 8th Cavalry Regiment on 13 December 1914, but he transferred to aviation on 20 August 1915.

Nicknamed “Bavarian Max” because he flew with “Saxon Max” Immelmann, von Mulzer’s first victory, on 13 March 1916, went unconfirmed. However, he had three confirmed victories between 20 March and 31 May.

He tallied three more wins in June 1916 after being transferred to the Russian front. During a dogfight in which he scored the second of three victories, his friend and wingman Immelmann was killed.

Von Mulzer scored two more victories on 8 and 22 July, giving him eight and earning him the Blue Max. He would down two more enemy planes before test flying an Albatros D.I and crashing to his death in Valenciennes, France, in September 1916. With 10 total confirmed victories, von Mulzer became the first Bavarian fighter ace, first Bavarian ace recipient of the Pour le Merite, and first Bavarian knighted for his exploits.